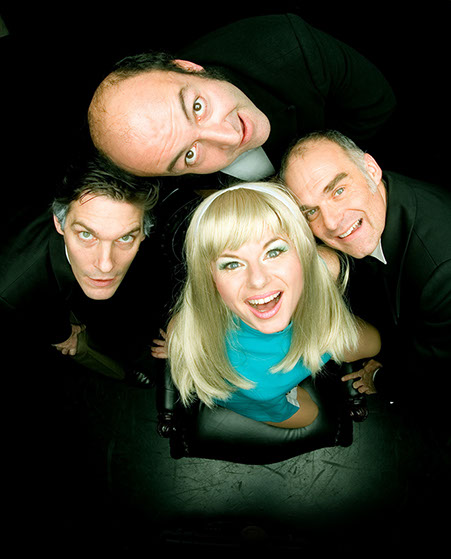 1997 Aitor, Petra and Toby meet while working with the Swiss action-theatre group Karl's Kühne Gassenschau in Zurich. With Paul Weilenmann (their former boss at KKG) the quartet conceive Spymonkey atop a French mountain. In December they work for a week with inspirational comedy writer/director Cal McCrystal at the Central School of Speech and Drama in London.

1998 'Stiff' is created with Cal and designer Lucy Bradridge over 6 weeks at the tiny Actors' Creative Training Studio in Brighton, and premieres at the Komedia Theatre on December 14th. It briefly tours England and Switzerland before the company disperses to other projects in 1999.

2000 In April Stephan Kreiss replaces Paul as the fourth member of Spymonkey. A reworked version of 'Stiff' tours Switzerland, Austria and the UK. One of the major hits that year of the Edinburgh Fringe Festival, it wins wide critical acclaim and a Total Theatre Award, and launches them onto the international festival and touring circuit.

2002 'Cooped' at the Purcell Room, in the London Mime Festival, at BAC London and tours Hungary and Finland. 'Stiff' tours to Canada, Taiwan, Romania, Czech Republic, Greece, France; Double Bill of 'Stiff' and 'Cooped' at the Paramount Comedy Festival, Brighton. Cirque du Soleil make their invitation to Cal and Spymonkey to create the comedy material for the adult cabaret they are producing in Las Vegas.

2003 Double Bill at the Queen Elizabeth Hall, South Bank Centre, in the London Mime Festival; tour of Switzerland. Rehearsals for 'Zumanity - Another side of Cirque du Soleil' in Montreal and Las Vegas; Shooting of Cirque Images' 'Solstrom' series for Bravo Cable Channel; 'Zumanity' opens in its own purpose-built theatre at the New York-New York Hotel & Casino, Las Vegas, in August.

2005 The feature-length documentary 'Lovesick', about the creation of 'Zumanity', by Emmy-Award-winner Lewis Cohen, is aired on Bravo Cable Channel in April. Spymonkey's last 'Zumanity' performance in August. The reworked version of 'Cooped' opens in October for a sell-out run, hosted by One Yellow Rabbit Performance Theatre in Calgary, Canada. Performances at Arosa Comedy Festival, Switzerland, in December.

2006 'Cooped' tours to Athens, Sydney Opera House, Melbourne Comedy Festival, and is relaunched in the UK with sell-out performances at the Theatre Royal, Brighton Festival, and at the Edinburgh Fringe, with Glynis Henderson Productions becoming our management company. Spymonkey TV appearances at the Melbourne Oxfam Gala, and on Granada's 'Comedy Cuts'. 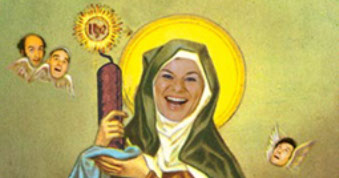 2007 'Bless', a show about the lives of the saints, previews in Switzerland, Brighton and Newbury and is nominated for 3 Betty Mitchell Awards in Calgary Canada. 'Cooped' at the Just For Laughs Festival Montreal, Southbank London, regional UK touring and Espoo Finland. TV appearances alongside George Lopez, William Shatner and Ardal O'Hanlon at the Just For Laughs galas. 'Stiff' at the Tron Theatre Glasgow in the Merchant City Festival.

2008 'Cooped' spring tour to Toronto World Stages Season and a 13-city tour of Holland and Belgium. Miss Behave's Variety Nighty at the Roundhouse London. 'Cooped' at the Leicester Square Theatre as part of Just For Laughs Live. Winter residency at Palazzo Amsterdam, a spiegeltent cabaret.

2011 Dutch/Belgian tour of Moby Dick. Work begins on 'Oedipussy', directed by Emma Rice and written with Carl Grose. 'Love In', a self-help cabaret directed by Christopher Green, opens at Brighton Festival, wins Best Comedy Award, and runs at the Udderbelly Southbank. 'Jekyll & Hyde', a co-production with Lyric Hammersmith and Peepolykus, directed by Sean Holmes and based on a script by Joel Horwood, has an outing at Latitude Festival. Swedish tours of 'Stiff' and 'Love In'.

2015 Spymonkey direct physical comedy for Chichester Festival Theatre's 'Mack & Mabel', starring Michael Ball; Petra appears at Shakespeare's Globe in 'Measure for Measure and The Oresteia. Rehearsals for 'The Complete Deaths' begins as part of residency at Central St Martins, University of the Arts London. Pilot workshop for addicts in recovery with Phoenix Futures.

2018  THE FLOP, a collaboration with Hijinx Theatre Company, at Edinburgh Fringe and on tour, nominated for a Total Theatre Award. MERRY WIVES OF WINDSOR at Royal Shakespeare Theatre and Barbiccan Spymonkey's A CHRISTMAS CAROL at the Liverpool Playhouse. Our first 3-week Clown Creation School in London.

2019 TARTUFFE at National Theatre. COOPED is revived as part of our 20th anniversary celebrations for Brighton Festival, and enjoys first US resindency in Tampa Florida as HYSTERIA. Petra begins work on ATOMIC SALOON with Spiegelworld Las Vegas.

We have been making sublimely ridiculous theatre since 1998.

Whilst performing with the Swiss site-specific theatre company Karl's Kühne Gassenschau in 1997, Toby, Petra, Aitor and KKG founder Paul Weilenmann embarked on a small winter side-project, inviting clown director Cal McCrystal to work with them for a week at Central School of Drama. A year later they presented their first show, STIFF, at Komedia Brighton, which enjoyed a brief tour of UK and Switzerland in late 1998. In 2000 Stephan Kreiss replaced Paul Weilenmann to establish the ensemble that has remained at the heart of the company's work since then.

With our dark, edgy physical comedy rooted ‘somewhere between Monty Python, the Marx Brothers and Samuel Beckett’ (The Houston Chronicle), and a quartet of performers from Spain, Germany and England, Spymonkey have proved to be a truly international phenomenon, enjoyed by and accessible to a wide range of international audiences. They have created 9 shows to date:

Bless (2007), about the lives of the saints directed by Cal McCrystal, nominated for 3 Betty Mitchell Awards.

Moby Dick (2009) directed by Jos Houben & Rob Thirtle, which firmly established them as a mid-scale company, including a run at the Lyric Hammersmith, and toured internationally to Finland, Holland & Belgium.

Every Last Trick (2014) by Georges Feydeau (adapted by Tamsin Oglsesby) a collaboration with Paul Hunter for Royal & Derngate Northampton.

They have made a number of collaborations and commissions:

Palazzo (2008-9, 2010-11) a spiegeltent gastronomical cabaret, seasons in Amsterdam and Stuttgart.

Jekyll&Hyde(ish) a co-production with Lyric Hammersmith and Peepolykus, directed by Sean Holmes and written by Joel Horwood for Latitude Festival in 2011.

Spookshow (2013) a site-specific commission for the Winter Gardens at Showzam Festival Blackpool.

THE FLOP (2018) a co-production with Hijinx Theatre Company Cardiff, nominated for a Total Theatre Award.

The company has a vibrant and increasingly over-subscribed educational department, frequently running workshops around the world. They have lectured to a number of universities and performing arts schools including Winchester University, Kingston University, Northampton University, University of Kent. In 2015 they piloted a programme for recovering addicts in conjunction with Phoenix Futures. More details about all of our educational activities here.

Spymonkey has been the subject of academic study by undergraduates of Rose Bruford (dissertations by Smari Gunnarsson and Mathew Baynton), University of York, University of Northampton, as well as PhD doctorate work by Lucy Amsden of Glasgow University, and Laura Cockett of Liverpool University. Publications examining the company's work include Demian Reis's examination of modern clowning 'Caçadores de Risos' (in Portuguese!) and Stephe Pritchard's study of contemporary dramatic practice. They are an associate company of the National Independent Schools Drama Association (NISDA), and appear on a number of GCSE and A level syllabuses as an exceptional example of devised physical theatre, clown and comedy.