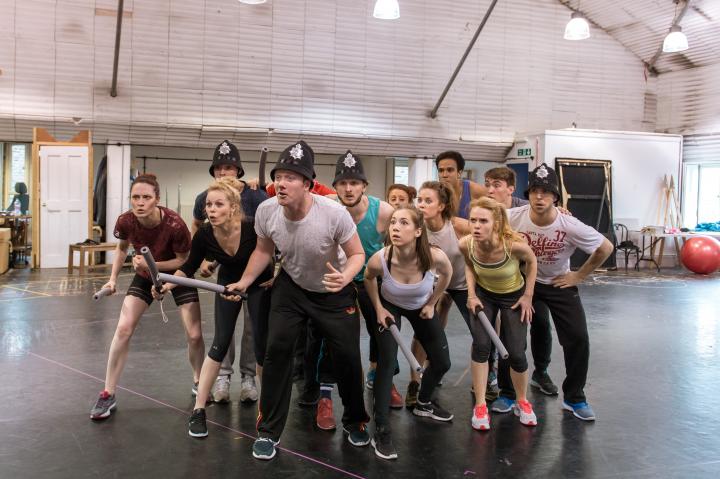 How do you make a show from scratch? This workshop is designed to understand the process from early conception through to production.

Spymonkey have over a decade of experience in creating devised shows and have worked with some of the best directors in this field from Cal McCrystal (Mighty Boosh, Peepolykus, National Theatre’s ‘One Man Two Guvnors’) and Jos Houben (Theatre du Complicite, The Right Size, École Jacques Lecoq Paris) to Emma Rice (artistic director of Kneehigh). In our devising workshop we open up our creative toolbox and show you how to create material from the smallest seed of an idea, how our greatest ideas are right under our noses (if only we knew how to look), how to build a number or scene and how to keep the work fresh both in rehearsal and in performance. We look at the context of the spaces we are creating for – large and small theatre spaces, cabaret, variety, street theatre, circus. We investigate the fundamentals – use of costume, props, lighting and sound. And we explore more advanced concepts – writing tools, devising games, character, group dynamics, status, narrative, dramatic structure, musicality and physicality.

ABOUT AITOR *Aitor was born in Bilbao, Spain. For the past 20 years he has been teaching and performing clown all over the world. He is one of the most sought-after clown teachers in the world, regularly holding sold-out master classes in London and New York. Aitor has been staff tutor at École Philippe Gaulier Paris; taught for Cirque du Soleil/Cirque du Monde Foundation, New York Clown Theatre Festival, Celebration Barn Maine, and at universities, institutes, and festivals to students, professionals and clown doctors all over the world including Madrid, Berlin, Damascus, and Taipei. He is also a co-founder and performer in the internationally renowned clown company, SPYMONKEY. His teachers include Phiippe Gaulier, Cal McCrystal and Pierre Byland. Aitor most recently directed Manifest Destiny created by Zack Fine and Lucas Caleb Rooney, a Frances Black Project.

ABOUT SPYMONKEY *Since their inception in 1998 Spymonkey have created some of the most outstandingly original comedy theatre, including STIFF, COOPED, MOBY DICK, OEDIPUSSY, ZUMANITY (for Cirque du Soleil), JEKYLL & HYDE(ISH) (with Lyric Hammersmith) and EVERY LAST TRICK (with Royal & Derngate). TV and stage appearances have seen them work alongside Sacha Baron Cohen, Miranda Hart, Sandi Toksvig,Ronnie Corbett, Fiona Shaw and Nick Frost. Widely acknowledged as world leaders in the field of clown and physical comedy, they are keenly sought as teachers, consultants and directors for their insight and experience in creating brilliant, original and singular work.