The Times on Thursday morning carried a full-page spread on The Complete Deaths, with interviews with director Tim Crouch, and comments from Michael Dobson from the Shakespeare Institute.

Without wanting to cast aspersions on the accuracy of any Murdoch news reporting, and whilst appreciating the pre-publicity, we would like to set the record straight that the show will have its world premiere at Brighton Festival in May 2016. We will be previewing the show at the Royal & Derngate Northampton.

The Complete Deaths is a Spymonkey co-production with Brighton Festival and Royal & Derngate. 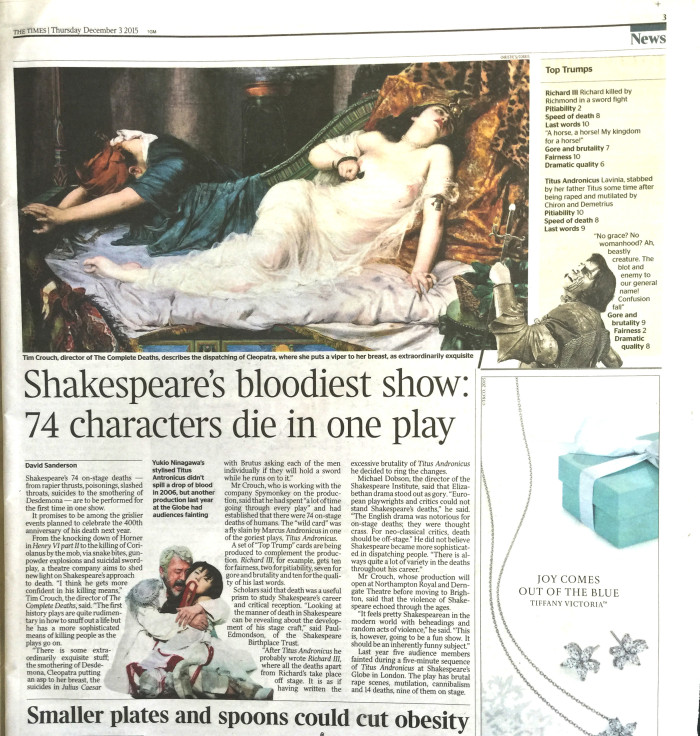 The Telegraph and the Daily Mail subsequently picked up on the story on their online editions:

DAILY MAIL ARTICLE: The bloodiest Shakespeare play ever: New production to feature all 74 of the Bard’s on-stage deaths in one show

….and the story picked up by various international news outlets:

Broadway World picked it up too: Spymonkey’s THE COMPLETE DEATHS Crams 74 Shakespearian Demises Into 90 Minutes

This subsequent Telegraph comment piece is a hilarious example of the news cycle eating itself, getting irate about something that they can’t see: “Shakespeare doesn’t deserve this monstering.”

Quentin Letts in the Daily Mail featured the show in a double page spread here: Shakespeare the mass murderer: Beheadings. Poisonings. Even a killer bear. As a new show recreates his 74 death scenes, QUENTIN LETTS says no one did butchery like the Bard