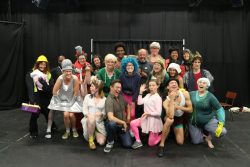 In May 2022 we are offering for the third time our intensive three-week Clown Creation School, aimed at emerging and professional performers who would like to build on their clown and physical comedy work, and take it to the next level of production and performance. It will be led by Spymonkey artistic directors Aitor Basauri and Toby Park, associate practitioner Sophie Russel and producer Emily Coleman. This year we are excited to be offering the course in partnership with Worthing Theatres and Museum.

We aim to build a strong ensemble dynamic, to encourage participants to go further and deeper into the work to explore new areas of comedic investigation, and to inspire and initiate new creative material and performing relationships that we hope will go on to flourish into the full glory of performance!

There will also be an opportunity to look at the basics of how to build a sustainable performing arts business, with sessions on fundraising, budgeting and tour booking led by our executive producer.

We believe that we have learnt the most about performing from the process of creating and building work towards performance. So we will use this as an impetus to creativity, by working towards a presentation of new work generated in the Clown Creation School, for an invited audience, on the last day of the workshop.

This year we have invited our friend and associate artist Sophie Russell to join us as guest tutor. Sophie has a long association with Spymonkey, having co-created and performed Spymonkey’s Christmas Carol, Mrs Hudson and Every Last Trick. She uniquely straddles the worlds of physical comedy, clown and contemporary theatre practice – she was most recently seen at Shakespeare’s Globe in the leading Shakespearean roles of Richard III, Malvolio in Twelfth Night and Bottom in Midsummer Nights Dream, and as part of the original cast of Emilia. Spymonkey have always found huge comedic inspiration in theatre, and in particular great acting. Shakespeare represents a rich source of theatre – not only for the beauty of his  language but also universal human themes, enduring characters and situations that chime with every age. Great theatre calls for Great Actors. And in attempting that greatness we create really funny work. Sophie will explore how ‘serious’ actor training can lead us to be finer comedy performers.

The course is aimed at emerging and professional performers of intermediate and advanced levels of experience, 18+. Previous participation in a Spymonkey course will be an advantage but is not a requirement of the course.

We are excited to be delivering the course in partnership with Worthing Theatres and Museum. The workshop space is beautiful, located in the pavilion on the pier, with the sea literally next to us. We have timed the course to run concurrently with Brighton Festival and Fringe, so that whilst working with us, you can take in loads of great shows. If you wish, we’ll also arrange to see some of these as a group.

The first week will be an exploration of the fundamental principles of Spymonkey’s approach to creating comedy theatre. Led by Aitor Basauri, we will look at establishing a shared vocabulary of exercises and games: le Jeu, clown, pleasure, complicity, vulnerability, generosity, sensitivity.

Week 2 will develop the concepts introduced in the first week, and look at them in applied contexts:

The Shakespearean Actor and Comedy – the building blocks of acting technique, voice and physicality, using Shakespearean text as a launchpad for comedic work, led by Sophie Russel.

The Business – seminars on running a business for emerging artists: fundraising, budgeting and tour booking with time to ask questions specific to your project, led by executive producer Emily Coleman.

We will leave some creative time at the end of the day for participants to work with each other on devising and rehearsing.

In the mornings we will continue to explore creating comedy theatre, including elements of melodrama (the pleasure of great acting) and bouffon (the pleasure of parody and the grotesque), as well as the contexts introduced in week 2.

Our aim through the whole course will be to gather moments, promising double acts and groupings of performers that we want to explore, build scenes, and look to develop these in the context of creating new work. In the afternoons we will have the opportunity to explore as a group how to work on new material, led by the three workshop leaders.

We will leave some creative time at the end of the day for participants to work with each other on devising and rehearsing.

The final Friday will climax in a presentation of some of this work-in-progress for an invited audience.

A 20% non-refundable deposit is payable on registration

For further information about the workshop please contact: education@spymonkey.co.uk

Sophie has worked as performer and co creator with Spymonkey on “Every Last Trick” (Northampton Theatre Royal), Mrs Hudson’s Christmas Corker (Wilton’s Music Hall) and A Christmas Carol (Liverpool Playhouse). She has also worked with Told By An Idiot (You Can’t Take It With You at Manchester Royal Exchange, Get Happy at The Barbican) and Peepolykus (Spyski! at The Lyric Hammersmith.)

As an actor she has worked extensively with the RSC (King Lear, As You Like It, The Comedy of Errors, Antony and Cleopatra, The Drunks, Oxygen, American Trade), The Royal Court (The Prudes, The Wolf From The Door, Collaboration and The Get Out) and most recently Shakespeare’s Globe playing the title role in Richard III, Malvolio in Twelfth Night and Bottom in A Midsummer Nights’ Dream as well as roles in Henry IV parts One and Two, Henry V and Emilia.

TV and Film includes: I Hate Suzie, The Invisible Woman, Kisses and Bumflicks and Casualty.

Sophie holds a post graduate certificate in Teaching Shakespeare from Warwick University and has led workshops for the RSC since 2011. Sophie was also Director of Physical Comedy on a production of The Comedy of Errors at the National Theatre and led workshops at the NT on clowning. Recently she has begun work teaching in drama schools at PPA and LAMDA working on Shakespeare and Acting technique. 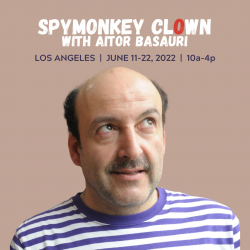 In the Spymonkey clown class, you will learn to discover what makes you funny, hone your skills and practice making an audience belly laugh! Through clear and specific instruction, Aitor will support you to develop and hone your comedic skills in a safe and fun environment. This positive group dynamic will allow you focus on following your impulse, being adventurous and taking risks. You will learn how to shine as an individual and improve on every spontaneous opportunity. In this highly enjoyable workshop you will play games, do exercises developing trust and complicity with the group. In this atmosphere of discovery and revelation, you will be developing and showing new material. Be prepared to find the pleasure in your own ridiculousness, stay optimistic, discover your comedy gold, and get ready to laugh until your face hurts.

Technically there are many other engines to make people laugh: status games, parody and improvisation. In Spymonkey’s workshops we will touch on all of them, creating an enjoyable and revealing atmosphere to discover the unique way in which you’re funny.

You will learn how to begin to trust your instinctive and spontaneous self. We will teach you technically how to make people laugh through status play-offs, parody, improvisation and many more games and exercises. All the sessions will be about creating a fresh, trusting and highly enjoyable workshop in an atmosphere of revelation to discover you’re funny. 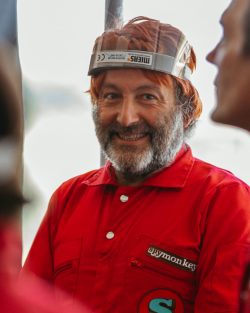 How do you make a show from scratch? This workshop is designed to equip performers with tools to take material from early conception through production.

In this workshop, we open up our creative toolbox and show you how to create material from the smallest seed of an idea, how our greatest ideas are right under our noses (if only we knew how to look), how to build a number or scene, and how to keep the work fresh both in rehearsal and in performance. We look at the context of the spaces we are creating for, from purpose-built theaters and cabarets to variety stages, circus tents, and street corners. We investigate the fundamentals—such as the use of costume, props, lighting, and sound—and we explore more advanced concepts, such as writing tools, devising games, character, group dynamics, status, narrative, dramatic structure, musicality, and physicality.

Heighten your sense of play in this grotesque, forbidden, and dangerous world in which the Bouffon lives.

A love of the grotesque, the forbidden, of bad taste, irony, parody, and all things deformed: these are the toys and tools of the Bouffon, the outcast who lives to provoke the audience without losing the love of the audience.

In this rich theatrical world of invention, the Bouffon lives to provoke the audience without losing their love. The stakes could not be higher: if they lose the love of the audience, the Bouffon will get KILLED.

In this workshop, we will play games and exercises that will help every performer find that place where their personal Bouffon is—a place of risk, a place of danger, a place of daring. In contrast to the Clown, the key to the Bouffon is discovering the intelligence of the performer in parodying, their cleverness in daring to mock and provoke the audience, while simultaneously staying alive, a balancing act which requires supreme sensitivity.

In the Spymonkey Clown workshop weekend, we will introduce Spymonkey’s philosophy of Clown Theatre: how to discover what makes you funny, and how to make an audience belly laugh! For us the starting point of being truly funny is finding the pleasure to share your unique sense of ridiculousness.

In this highly enjoyable two day workshop you will play games, do exercises to develop trust and complicity with the group, the pleasure to play to the best of your ability, to stay optimistic, and discover your comedy gold. Get ready to laugh until your face hurts!

“It was fantastically liberating. The workshop is about being yourself and tapping into what is uniquely funny about you” Liam Woodman – TV writer

Suitable for all levels of experience, from enthusiastic novice to seasoned professional.

We are offering a Bursary Scheme for this workshop to people from diverse backgrounds or those who are underrepresented on our stages. The deadline for applications to the scheme is Wednesday 20th April, 10am: https://www.thepointeastleigh.co.uk/join/spymonkey-bursary-information/